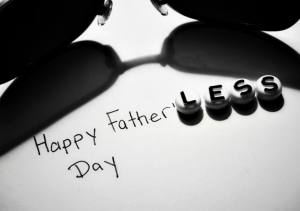 I had dinner last night with a highly successful man who didn’t meet his father until he was 10. Now at 47, he can count on one hand the number of times he has engaged with him. I was instantly drawn to this question: How in the world as a fatherless young man, a black one at that, did you navigate your way through this world, and find yourself at the doorsteps of Harvard not once, but twice? He shrugged the question off, quite possibly because he’s tired of answering it. Tired of having to qualify the “anomaly” of his success.

But the question was more for me than him, because I am a single mom to a young black boy whom his father sees far too infrequently to make a difference. You can imagine how unnerving it was to hear this statement from BD (baby daddy) the other day during his visit: “I hope our son gives us grandkids.” He was annoyed because my son naturally goes to me for everything, which leads BD to think that I’m raising a “mama’s boy” who is destined to become a barren homosexual.

I was pissed! The nerve of him. But let’s sink into this a little. I mean it’s true, there are some qualities of “manhood” that I’m just unable to expose my son to. And while I’m not concerned with the outcome of his sexual orientation, I do worry about the effects of emasculation and male abandonment on his spirit. Will he be as strong and courageous as he needs to be? Will he learn to be a respectable, hard working, relentless young man? Will he not cower in the face of difficulties and setbacks? Am I doing enough, independent of offering a male figure in his life?

Mom’s of young men, weigh in on this. How do you combat the mom guilt around the issue of raising fatherless boys? Do you secretly fear that you’re raising “mama’s boys” who will grow up to be co-dependent, angry, and uncertain of themselves?